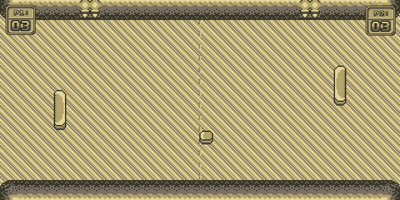 When I first started this project I was in a place where I had pretty much given up on making games, I was completely burnt out and felt it was a lost cause, then awhile back I seen how game jams were bringing new and old people to make games and I also seen Pixel Prophecy's videos on Youtube which further inspired me.

I have tried numerous times to thing of something to make for the LD jams but the themes always seem to suck so I left it awhile and looked out for an easy theme to work with game jam theme and recently I seen a small game jam called Juice Jam, the idea behind it is to make a game with the core gameplay rules of a classic game which this time was ATARI's PONG and give it abit of a jazzing up with animations, sounds, particles and what ever else you can think of, as long as it plays the same as the original anything really goes.

I originally started developing it to look like a straight up Pong clone but I thought that was boring, so recently I've followed some people on Twitter that make games using classic console limitations, so with that in mind I then thought of some classic games I played when I was younger, first thing that came to mind was the Nintendo Gameboy classic "Zelda: Links Awakening".

Using Pyxel Edit I then went to work on the pixel art for the game using the dungeon levels for the inspiration, took me a few hours get enough done to see where I was going with it and was quite positive about the style, I went with it and made the frame in Clickteam Fusion using the tiles I created in Pyxel Edit and copied over the existing events and objects.

That will come once I get it to a state I would be happy with.

It's been an interesting time making this game and has inspired me to get back to making games again, thats what is great about these jams as they sometimes give you just enough inspiration to make something special for yourself and that in turn can give you a push in the right direction to make something original.

If you've read this, I'd like to thank you for your time and hope it has inspired you or someone else to make a game.